In one of our previous articles, we approached the alarming issue of counterfeiting and its ever-growing trade on a global scale. Counterfeiting has been increasing because of globalization and the Internet. A wide range of sectors is affected by knockoffs, even products that you might find surprising. In this article, we’ll address five unexpected daily products that are being counterfeited in Malaysia. 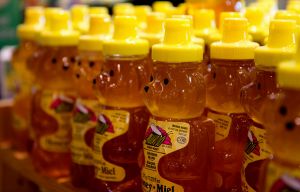 A few years ago, the story of a man discovering he got diabetes because of the consumption of fake honey was all over the Malaysian news. After several tests, authorities revealed that 80% of honey sold in Malaysia was counterfeited in 2017. The Malaysian Agricultural Research and Development Institute (MARDI) ran a series of tests on honey labeled as ‘authentic’. The samples turned out to be fake honey actually made of sugar, cornflour and starch – ingredients harmful to consumers if absorbed excessively and dangerous to diabetes.

Recently, kelulut honey – made by stingless bees and of high nutritional value- has gain popularity in Malaysia which led to an increase in the production of artificial kelulut honey. The Ministry of Health’s Food Safety and Quality Division revealed that 9.1% of tested kelulut honey did not respect the standards established under the Food Regulations of 1985.

The BBC reported in an article that more than 200 boxes of fake baby milk powder were seized by Malaysian authorities in 2017. The fake infant formula products were found in pharmacies and convenience stores in the city of Johor Bahru. The counterfeited baby milk powder was identified as the cause of fevers and rashes on children. The boxes were copycats of the well-known brand Mead Johnson and imitated its Enfalac A+ 1 formula. The packaging was copied so well, foil pouches had to be carefully examined.

MILO is a famous beverage drink in Malaysia – if not the most famous one – but it didn’t prevent it to be counterfeited too. Four years ago, the Domestic Trade, Cooperatives, and Consumerism Ministry (KPDNKK) discovered 225 fake packages and several barrels of chocolate drink powder in the town of Mantin, Negeri Sembilan during a raid. The total amount of counterfeited goods was worth RM 250,000 (around USD60,000). Following this event, MILO and parent company Nestlé issued statements and indications on how to differentiate fake MILO packages from genuine ones.

Malaysians were not only victims of counterfeited food but also from drugs. Fake Panadol tablets were seized in a raid in Penang along with the machine used to make them. After conducting tests, the National Pharmaceutical Control Bureau revealed the main ingredients of the copycats were actually plain wheat flour. The Ministry of Health estimated that 3% to 6% of sold drugs could be fake in Malaysia in 2015. An essay on counterfeit production in Malaysia identifies the factors of fake drug traffic, namely low drug regulatory enforcement, uncontrolled supply chains, prices, corruption, and many others.

After public complaints were made, the Domestic Trade and Consumer Affairs Ministry discovered that fake toothpaste was sold in retail shops in the touristic town of Batu Niah,  Niah National Park. Counterfeiters smuggled toothpaste tubes made abroad with packaging imitating a popular local brand and its logo. During the raid, more than 1,600 tubes were seized and sold in rural areas to escape the police’s detection.

In the end, this selection shows that any good can be counterfeited, even the ones we least expect. These products will add up to the already very long list of knockoffs: clothing, jewelry, leather goods, shoes, electronic devices, cigarettes, stationery, alcohol. Counterfeited products can undermine the economy of a country and damaged its reputation on the international stage. But most of all, they can be dangerous for the consumers and badly affect their well-being. Nowadays, there is a real need for solutions for fakes to be rapidly identified and for illegal productions to be stopped. On the other hand, tracking down authentic products can be another way to deter counterfeiting.

Understanding the dangers and risks of the counterfeiting trade, LuxTag® has come up with solutions based on blockchain and its transparent nature to track down real goods. Check out our products here: www.luxtag.io/our-product-page

Counterfeit goods: how harmful are they to you?
28 Jan 2019
How Can Luxury Brands Take Advantage of the Digital Revolution?

No doubt, the business landscape has changed significantly as a result of the digital revolution, thereby transforming how brands reach…

What Features Can Blockchain Bring to Your Logistics Operations?
28 Mar 2019